The Three Laws of Human Behavior

When Isaac Newton put forth the three laws of motion more than three hundred years ago, he did something radical.

It wasn’t his theories or the computations behind them that were so revolutionary — in fact, Newton’s first law is a mere reiteration of Galileo’s theory of inertia, formulated 50 or so years earlier. What was radical about Newton’s three laws was that he was able to distill such an incredible volume and complexity of advances in the physical sciences (see below for a refresher, in case it’s been a few years). These three simple laws have not only been the basis of countless lab and field experiments and a precursor to Einstein’s theory of relativity, but were also used to inform the inventions and innovations of the industrial revolution and beyond. 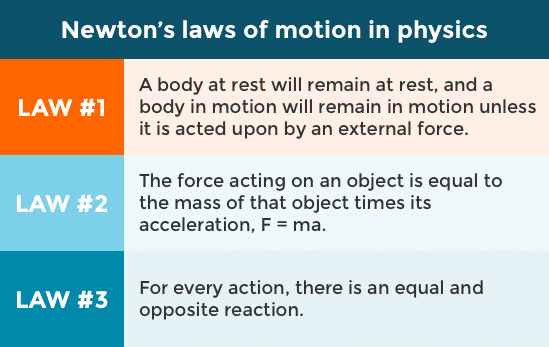 But there’s no equivalent of Newton’s laws of motion in the behavioral sciences, and unfortunately Newton’s work in math and physics doesn’t provide much information about human behavior. There’s no direct translation of “F = ma” to the methods of our human madness. Fortunately, there do exist some general tendencies underlying much of our behavior.

In the spirit of Newton’s three laws of motion, this article presents the Three Laws of Human Behavior. Let’s consider them one at a time.

Humans are creatures of least resistance. We take the road most traveled, or the road best paved. So much of our behavior runs on autopilot that it takes a significant degree of effort to take simple actions outside of our normal routine — even when we have the best of intentions for changing our behavior. Think of how many times you’ve resolved to start biking to work, and how many times you’ve actually done so. There’s a bias we share that describes why we’re so bad at this, and it’s called the status quo bias. The status quo is a powerful force in human behavior, directly analogous to the inertia described by Newton’s first law of motion: force is necessary for a change in motion to occur.

There are two primary types of forces in the context of human behavior, just as there are in physics: forces that get in the way of performing a behavior are called “friction” — from the feeling of exhaustion when it’s time to exercise to the application form to set up a health savings account. Or the barriers encountered trying to make a routine doctor’s appointment. “Fuel” is the second type of force, representing anything that makes a behavior more appealing — from the gamification of un-fun procedures to delivering incentives contingent on good behavior. Like the challenge of competition as reward substitution to encourage exercise.

Behavior is not something that lives in a vacuum. It’s the combination of a person — with all their intentions, beliefs, knowledge, motivation, personality, history and so on — and their environment — including everything from the choice architecture of a grocery store checkout line to the lights, smells, and friends or foes surrounding them. It is a special mixture of these two types of ingredients, the person and their environment, that leads to a particular behavior being exhibited at a particular time and place.

Kurt Lewin is famous for pinning human behavior down to these two essential elements: the individual characteristics or state of a person, and the environment in which they are situated. His universal equation B = ƒ(P,E) goes way back to 1936 and is no less relevant today.

This law is more complex than it may appear at first glance, going beyond the independent observations that behavior is dependent on the person, and that behavior is also influenced by the environment. In other words, Lewin’s equation doesn’t imply that behavior is a function of the person, or B=ƒ(P) and — separately —  that behavior is also a function of the environment, B=ƒ(E). There is, of course, a great deal of research examining the person and the environment separately. We might observe that when someone (let’s call her Emma) is stressed, she may be less likely to order a salad at her work cafeteria and instead opts for a less healthy alternative. And — separately — if we put up a sign encouraging salads in the cafeteria, we might see an increase in salad uptake among lunch-eaters overall. But knowing each of these on their own will not get us much closer to knowing whether Emma will order a salad today.

The chart below demonstrates how Emma’s lunch choice (to order a salad or not) is affected by the interaction between her state of mind (her stress level) and her environment (whether or not there is a sign advertising salad in the cafeteria). 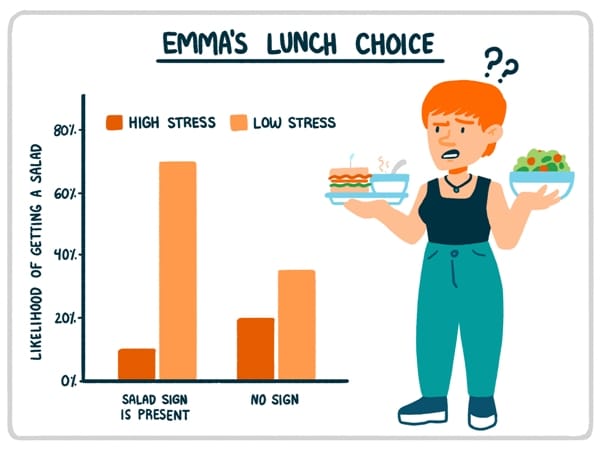 As expected, Emma is generally more likely to order a salad when she is not stressed overall (compared to when she is stressed), just as she is generally more likely to order a salad when there is a sign about salads present (compared to no sign). But something interesting happens when she is both stressed and there is a sign. In this case, when Emma is stressed, the sign actually backfires and leads to a lower likelihood of Emma getting a salad than if there were no sign present. We might suspect that when she’s stressed, seeing a sign promoting salads could come off as patronizing, leading Emma to exhibit reactance which triggers a rebellion against the salads. While this is just one fictitious and simplified example, it demonstrates the importance of considering both the person and the environment when trying to understand behavior.

There are costs and benefits attached to every decision. We may actively weigh the pros and cons of a decision at times, and other times we may not. But regardless of our attention to the tradeoffs inherent to any decision, there are often losses suffered in one area when gains are made in another. For example, say you are considering starting a multivitamin. You might say: Sure, it may very well be a placebo, but what’s the downside? What cons could there be to taking a vitamin? To start, there’s the fact that you have to pay for it. Vitamins may not be exorbitantly expensive, but for every dollar that is spent on vitamins, that same dollar cannot be spent on something else. Say you spend $15 for 150 3-a-day gummies, so one bottle lasts 50 days, and you have to buy ~7 a year (7*$15=$105 a year). Ten years of vitamins means giving up $1,050 that you could spend on a really nice new bike, or 235 pumpkin spice lattes or nine days at Disneyland.

This concept of “what are all the things I am giving up if I do X?” is known as the opportunity cost, and it’s a type of tradeoff that we often ignore. One way to weigh tradeoffs like these is to classify the potential pros and cons of a decision and then weigh them (a method called signal detection theory; see this article written with Dan Ariely for a deep dive). When situations are complex and involve a degree of uncertainty, we can use this method to consider the tradeoffs of a particular decision. Because our time and resources are limited, we have to choose how to spend them wisely.

Unintended consequences are related to tradeoffs. Just like the pros and cons of every decision that we don’t see, there may be some unanticipated effects caused by the decision. When making a decision, we may not predict future effects that negate or undermine the positive aspects of that decision. A classic example of this is the “crowding out” or overjustification effect, where a positive behavior (like exercise) is initially boosted with an extrinsic incentive (e.g., financial reward), but the positive effect disappears (and may even retreat to a level lower than before the incentive was introduced!) as soon as the incentive is discontinued. Rewards like this can increase a behavior in the short term, but undermine motivation in the long term.

Often times, our actions have effects that go beyond the impact on ourselves. These types of effects on third parties are called externalities, and externalities can range from the pollution produced by cars or coal-burning factories to your decision to play outrageously loud music, which your neighbors might not appreciate very much as they attempt to have a romantic evening at home. The tragedy of the commons is a classic example of negative externalities: when each individual acts in their own interest, it’s not their intention to deplete the pool of resources so that everyone else suffers — but that’s exactly what can happen when shared resources are abused. Unintended consequences can be highly complex, as in the case of plastic bag bans actually being harmful to the environment despite the good intentions behind the policy. When Isaac Newton proposed the three laws of motion in 1687, the physical sciences were undergoing a considerable flurry of advancement — so much so that both the Industrial Revolution (~1760-1820) and the philosophical Age of Enlightenment (~1715-1789) were spurred soon after. The advances made during these two landmark historical eras (that you surely remember from your high school history class) were made possible, in part, because of a newfound enthusiasm for leveraging scientific advances to industrial applications.

Only now in the twenty-first century are practitioners beginning to take seriously the findings and methods of behavioral science to harness them within industry. Behavioral science has graduated from being a popular buzzword to a workforce necessity at innovative companies, and the understanding of human behavior is being applied to industry in ways like never before — not only for marketing purposes, but in decision-making across domains as broad as banking, consumer products, and healthcare.

Like the physical properties of the universe, human behavior is complicated. And just as Newton’s Laws describe the motion of physical objects, these Laws of Human Behavior aim to provide a general model for how humans behave. People tend to stick to the status quo unless the forces of friction or fuel push us off of our path; behavior is a function of the person and their environment; every decision includes tradeoffs and the potential for unintended consequences. If we keep these three laws in mind, we should be able to design better products for people to help them behave better — not only in the labs of universities but in the private sector, from your savings account to your fitness app.

Aline Holzwarth is an applied behavioral scientist, primarily focusing on digital health research and scientifically informed product design. She is Head of Behavioral Science at Pattern Health, a healthcare technology company that makes it easy to create personalized care plans (patterns) for patients, leveraging behavioral science to help patients stick to these patterns. She also co-founded the Behavior Shop, a behavioral science advisory company, and holds an appointment as Principal of the Center for Advanced Hindsight at Duke University, an applied behavioral science lab that helps people be happier, healthier and wealthier, at home and abroad.